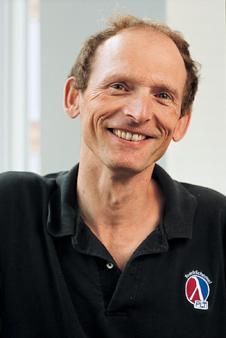 Matthias Felleisen, a Trustee Professor at Northeastern University’s College of Computer Science, has spent 30 years exploring programming languages and the pedagogy of software development. After receiving his PhD at Indiana University in 1987, he launched his academic career at Rice University; in 2001, he moved to Northeastern.

In 1995, Felleisen launched two related projects: (1) a K-12 outreach project with the goal of synthesizing mathematics and programming education and (2) the Racket language design project in support of the outreach project. Felleisen and his team taught dozens of intensive 5-day teacher training workshops over 20 years, focusing on program design as systematic problem solving. Working with Northeastern undergraduates, they also created the Bootstrap curriculum for middle schools; the curriculum has been adopted by code.org. The team’s Racket programming language has become a test bed for language design ideas from mixins to frameworks for domain-specific languages, from software contracts to gradual typing systems, and from web programming disciplines to distributed interactions. It is used in many applications, from DoD software to Naughty Dog’s games.

For his research on programming languages, Felleisen was inducted as an ACM Fellow in 2006 and received ACM SIGPLAN’s Achievement Award in 2012. Also in 2012, his paper on contracts for higher-order languages was picked asthe most influential ICFP 2002 publication. Felleisen has delivered keynote addresses at many programming language conferences, including POPL, ECOOP, and ICFP. For his educational outreach, ACM honored Felleisen with the Karl V. Karlstrom Award in 2010. ACM SIGCSE named Felleisen Outstanding Educator of the Year in 2011. In conjunction with the latter, he delivered the keynote at the annual Symposium on Computer Science Education.