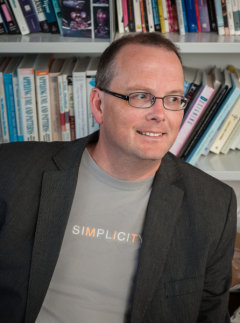 James Noble is Professor of Computer Science and Software Engineering at Victoria University of Wellington, New Zealand. James has B.Sc(Hons) and Ph.D. degrees, both from VUW, completed in 1997. After leaving VUW, James worked in Sydney, first at the University of Technology, Sydney, and then at the Microsoft Research Institute, Macquarie University. James returned to VUW as a lecturer in late 1999, just in time to avoid the predicted end of the world.

James’s research centres around software design. This includes the design of the users’ interface, the parts of software that users have to deal with every day, and the programmers’ interface, the internal structures and organisations of software that programmers see only when they are designing, building, or modifying software. His research in both of these areas is coloured by my longstanding interest in object oriented approaches to design, and topics he has studies range from aliasing and object ownership, design patterns, agile methodology, via usability, visualisation and computer music, to postmodernism and the semiotics of programming.