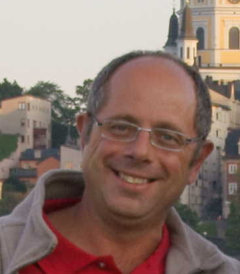 Davide Ancona (PhD in Computer Science, University of Pisa, 1998) is Associate Professor at the University of Genova. His main research interests include type systems, object-oriented programming, coinduction methods for programming languages, modules and components, software reuse and maintenance, multi-agent systems, and behavioral types. He is author of more than 70 publications. He is the secretary of the executive board of AITO, Association Internationale pour les Technologies Objets (since Jan 2013, previously Vice-President since Jan 2012), and member of the editorial board of the Central European Journal of Computer Science and of the ACM/SIGAPP Applied Computing Review (ACR). He has been guest editor of special issues of Science of Computer Programming and Journal of Object Technology. In 2009 he received, together with G. Lagorio, the best paper prize at ECOOP. He has participated to several national and European projects and has been PC member of several workshops and conferences: WOOD’04, Bytecode 2008, ESOP 2008, DLS 2009, 2010 and 2013, FOOL 2010, RP 2011 and 2012, ECOOP 2013 and 2014, POPL 2015 (External Reviewing Committee). He has been involved in the organization of several scientific events: organizing chair of ECOOP 2009, program co-chair of FTfJP06 and of OOPS special track at SAC from 2004 through 2015, co-chair of CILC 2015.