The European Conference on Object Oriented Programming is dedicated to the study of object-oriented technologies broadly construed. ECOOP turns 30 this year. 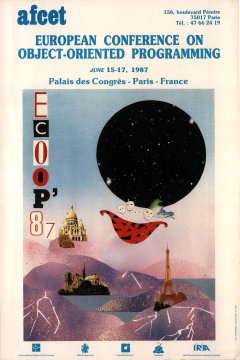 A few, subjective, words about its first decade.

ECOOP has roots in a meeting held in October 1983 in Le Cap d’Agde. After three such informal meetings, it was decided to start a conference on the topic of object-oriented programming. The first ECOOP was in June 1987 in Paris; it received over 100 submissions and published papers by Bjarne Stroustrup on the meaning of Object-Oriented Programming in C++, Richard Gabriel et al. on Common Lisp and Kristen Nyygard et al. on Patterns in Beta. The second ECOOP was in Oslo, the city where object oriented programming was born in the 1960s. The paper by Peter Wegner and Stan Zdonik explained key principles of Inheritance and Subtyping. The 1989 conference was held in Nottingham; it included a paper by L. Peter Deutsch on Smalltalk’s history and future. In 1990 ECOOP and OOPSLA joined forces in Ottawa. That was the year Gilad Bracha and William R. Cook published their paper on Mixin-based Inheritance. In 1991, ECOOP was in Geneva. David Ungar and his students Urs Hölzle and Craig Chambers published their seminal work on optimizing the SELF language. The next year, in Utrecht, Craig Chambers published a paper on Multi-Methods in Cecil. In 1993, ECOOP was hosted in Kaiserslautern and saw the publication of the Design Patterns paper by Erich Gamma, Richard Helm, Ralph E. Johnson and John M. Vlissides. This was also the first time ECOOP was run under the auspices of AITO. AITO is the Association Internationale pour les Technologies Objets. It not only provides a formal mechanism for ensuring the continuation of ECOOP, but also is a legal (non-profit) entity that can facilitate the financing of future conferences. 1994 was held in Bologna and featured Kent Beck and Ralph E. Johnson’s paper on Patterns and Architectures. The following year, ECOOP came to Aarhus where Ole Agesen presented his thesis work on the Cartesian Product Algorithm which has been influential for the analysis of object-oriented programs. ECOOP 1996 was held in Linz. At the time over 170 submissions were received cementing the position of ECOOP as one of the key conference in programming languages and systems.

Over the years, object-orientation moved from an object of scientific curiosity to become the dominant programming discipline, adopted by most industries and routinely taught in introductory computer science classes. ECOOP has adapted to its success, broadening its scope and welcoming research across programming languages and systems. In 2013, ECOOP adopted the artifact evaluation mechanism to encourage repeatable science. In 2014, Richard Jones introduced double-blind reviewing for the selection of the papers in the main conference. In 2015, ECOOP became the first major programming language conference to embrace Open Access. Moreover Camil Demetrescu and Matthew Flatt, the Artifact Evaluation Co-chairs, initiated the publication of short papers describing artifacts, thus giving increased visibility to repeatable research. Lastly, 2015 saw the creation of Curry On conference, a co-located event which aims to recapture some of the developers who used to attend ECOOP in its early days.

To recognize individual scientists with outstanding career contributions and single out promising early career researchers, AITO created the Dahl-Nygaard Prize in 2004. In 2008, the Distinguished Papers Award was created to shine a light on notable contributions in the field of object-orientation appearing at the conference. Since 2013, a prize for Distinguished Artifacts accompanies the Artifact Evaluation process. Starting this year, a new award will be given: the Test of Time Award will recognize notable papers published at ECOOP 20 years ago.